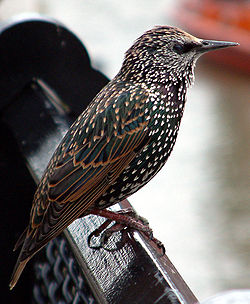 Large numbers of starlings arrive from as far away as Scandinavia to join their native cousins as they roost for the winter. The flocks, which can swell to as many as 40,000 birds at the peak in December, used to be seen each evening over West Pier as they performed their spellbinding aerial show known as ‘murmuration’. These days they appear only from time to time through the winter months and in far smaller numbers than before. A recent Facebook post including a beautiful footage of the murmurations over the West Pier prompted discussion as to why they have been in decline in recent years. We asked RSPB Brighton Starlings who gave us the following helpful reply.

“There are more than one possible answer to this. Firstly the numbers coming to the U.K. have been considerably reduced over the last five or six years and hence less come to Brighton. We also know that numbers increase when a very cold weather spell hits North eastern Europe as most of the starlings frequenting the towns roosts are from Germany and Poland and eastern parts of Russia. Since the fires on the West Pier and the structure becoming more open the birds roosting there have spread out and now are seen on the Palace pier (Brighton pier for non-locals) and often in quite large numbers under the Weatherspoons at the Marina.”

Starlings feed up to 20 miles from their winter roost, returning each evening. In late afternoon feeding flocks join together to form large pre-roost gatherings in places where the birds can get one last meal before nightfall. At dusk, birds from these gatherings fly, often in a swirling cloud-like formation, to the roost.