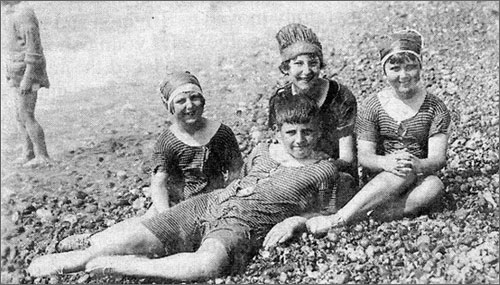 “I returned to Brighton 45 years ago after an absence of some 50 years and was appalled to see what had happened to my beloved childhood playground. Yes, as a schoolboy in the 1920s, I looked upon the West Pier as my second home. At weekends and holidays I spent many hours waking along its narrow walkway towards the area where the various traders and “games” were situated. The latter would seem quite primitive to today’s youngsters with their sophisticated electronic gadgets but to me, in my pre- and early teens, they were a delight. Not that I had the money to play on them. Just watching the punters, especially the trippers (a word always spoken with a certain amount of scorn!) pouring out their cash, was an entertainment in itself. There was one “gambling” machine, however, that some of our gang did play on. I’ve used quotes because, for those who knew its inner workings, it was not a gamble.Another memory is of the pierrots who had an open-air stage towards the end of the pier. It cost money to enter the enclosed space with its deckchairs but one could watch for nothing through the glass above the barrier. One troupe which stands out in my mind was that of a Scottish woman called Ouida McDermott, mocked by the comedian as Oh You Ida McDermott. Then there was the theatre itself. I’m currently helping a QueenSpark Books project on “Brighton theatre from the 20s” by recording my memories of that. I never missed a pantomime there and have since judged all others by their yardstick. I also saw a performance of Macbeth there, performed for school parties.

I also remember the fishing platform at the end of the pier. It has see-through bars to stand on and I always felt a little insecure there. However, though not an angler myself, I often accompanied my friends who were. I rather disliked the slimy creatures as they wriggled on the hook and marvelled at the casual way my friends handled them

There were, of course, the liners that travelled along the coast and used the pierhead as a landing stage. They also did one trip across to France per day. I couldn’t afford to go on them but on one occasion a lodger of ours treated me to a trip. I can only remember being seasick!

An Amazonian woman in a bathing costume and a bathing gown paraded along the top of the pier exclaiming: “Any more for the diving at the pool at the end of the pier!”. She really was a remarkable diver. The diving board was at a great height, much higher than the current Olympic one (or was that just in my childish imagination?) She did all the trick dives we know of the Olympics and a few more. One amusing thing she did was to tell us that, when drowning, men came up face down and women face up, “because the men wee ashamed of themselves.” And she demonstrated the difference. ”

I have been a member of the WP Trust for decades.