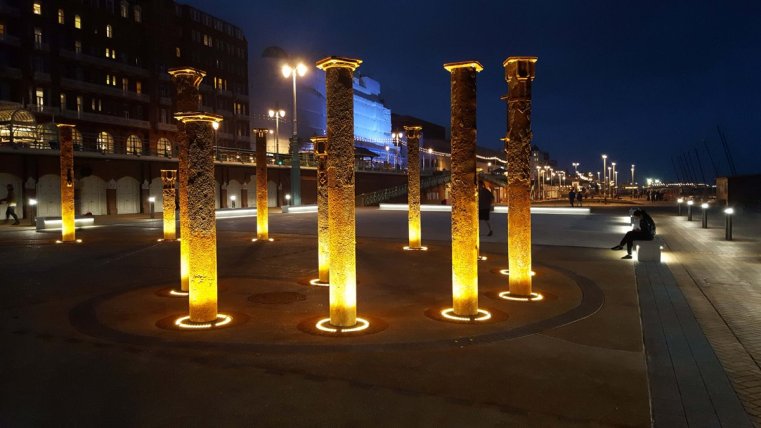 The twenty-four cast-iron columns now standing within The Piazza, east of the British Airways i360, were originally part of the substructure of the West Pier.

The Piazza is an area dedicated to the heritage of the West Pier, celebrating its unique personality and charm. A large flexible space for visitors to enjoy. It’s part of the landscaping work on the seafront funded by the council’s income from the British Airways i360.

In the early stages of the design process it was agreed that original artefacts from the West Pier would be incorporated into its design. 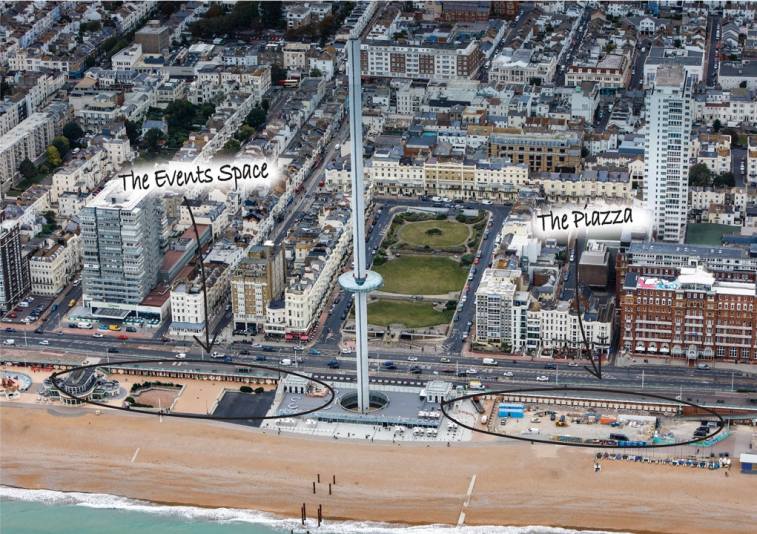 The West Pier and the columns

The West Pier opened in 1866 when pleasure pier building was at its heyday. It began as a simple ‘open deck promenade’ pier.

Glasgow company Robert Laidlaw manufactured the substructure of the pier. The ironwork was constructed using cast-iron threaded columns screwed into the seabed. It was then strengthened with girders and ties to support the promenade deck above.

Over the following 50 years it was transformed into a pleasure pier. An entertainment pavilion was added in 1893 and a concert hall followed in 1916. The concert hall was immortalised in the satirical First World War film ‘Oh What a Lovely War’.

The columns now standing within The Piazza were originally located on the beach. They survived the two fires in 2003 which reduced the remaining pier to the skeleton which survives today. 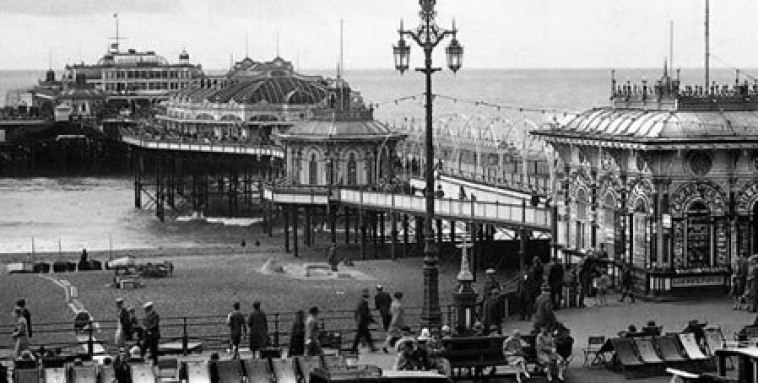 A total of 38 columns were carefully transported by Mackley, the main contractor for the British Airways i360, to their yard in West Sussex. The columns were safely stored there until the landscape design project could begin.

In late 2014 the landscape design team commissioned a condition report to find out the general state of the columns. The columns were found to be suitable for re-use in a non-structural and non-load bearing capacity.

A much more detailed inventory of the columns was carried out during the autumn of 2015. Each column was numbered, measured and assessed for suitability.

In the winter of 2015 the columns were transported to Swan Foundry in Oxfordshire. Swan had worked with Marks Barfield Architects on the restoration of the West Pier Toll Booths that now stand either side of the British Airways i360.

The design team felt it was important to retain as much of the intrinsic character of the columns as possible. Working closely with Swan a decision was made to have them lightly shot blasted. This removed surface rust, dirt and shingle without making the columns appear shiny or smooth. During this process the number of useable columns reduced to 24. 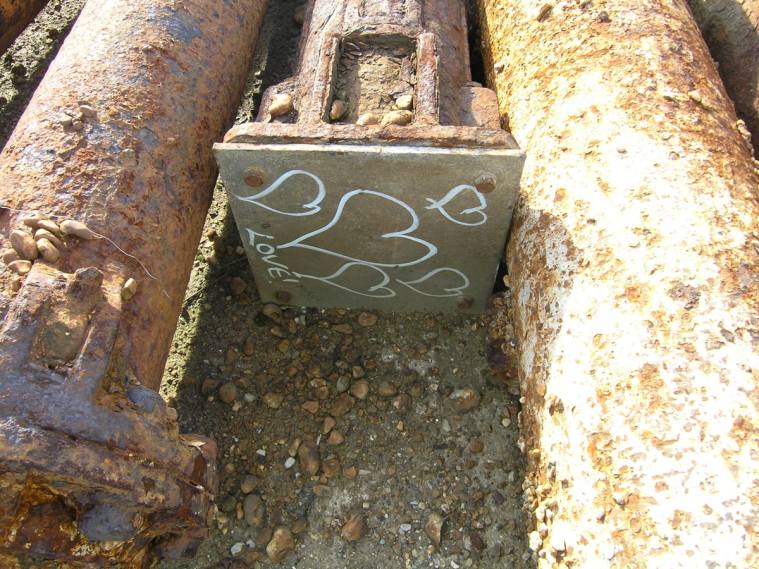 The columns on The Piazza

The team felt it was important to provide an appropriate setting for the columns within the surrounding paving. They needed to be anchored to the ground in a way that responded to their scale and character.

Artist and sculptor Steve Geliot was commissioned to design and manage production of bespoke cast-iron details to sit around the base of each column and complement their striking simplicity.

Steve sought inspiration from the delicate elegance of the windows in Eugenius Birch’s magnificent architecture and life forms from the sea such as shells and urchins.

Steve visited Swan Foundry and captured on film the casting process, which has not changed significantly in centuries.

The engineers responsible for the design of the jointing for the concrete surrounding the columns did not want to detract from the flowing spiral.

Instead of creating angular square bays, the engineers introduced curved joints. Sympathetic to the geometric pattern, these are a relatively rare and subtle instance of art by engineering and complement the overall design. 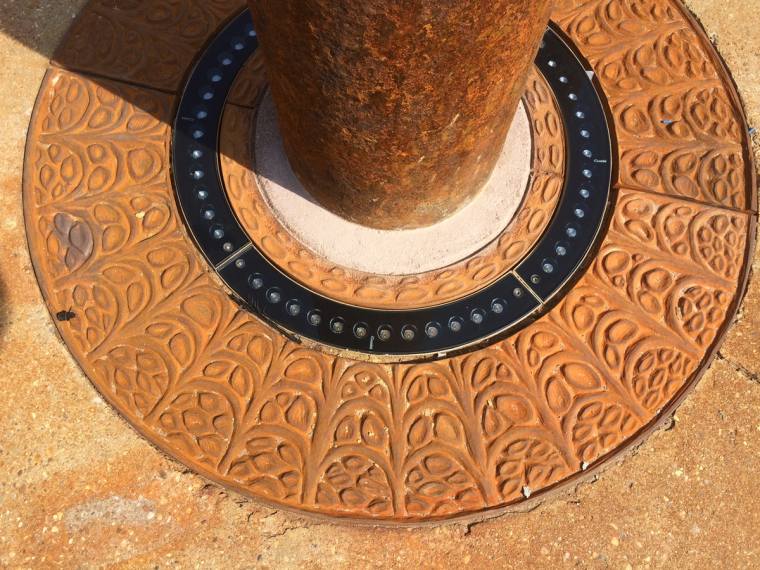 The arrangement of the columns on The Piazza is inspired by the ‘Golden Spiral’ (otherwise known as the Fibonacci spiral after the Italian mathematician). The spiral is found in nature and used to achieve balance and harmony in architecture, art and design.

The geometric and mathematical origins of the spiral reflect the masterful engineering of the West Pier, now re-imagined through the design of the ‘vertical pier’ of The British Airways i360. The spiral also reflects the simple curve of waves on the beach where the columns used to sit.

The text references the peak number of recorded paying visitors to the West Pier and a speech made at the opening of the West Pier by Member of Parliament and recorder John Locke.

The ‘golden rectangles’ that form the basis of the spiral, are marked with a broken line of paving. 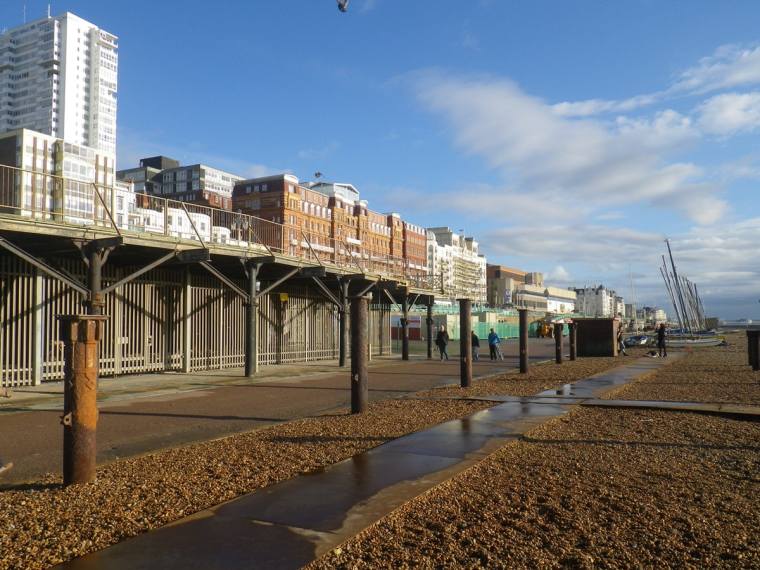 Victorian engineers relied upon cast iron to support their piers because of its high resistance to corrosion. Nevertheless the columns will continue to rust and change in colour, likely becoming a multitude of lighter shades.

Marine engineers from Helmsley Orrell Partnership, have worked on the West Pier for over two decades. They have carried out a detailed inspection of each of the twenty-four columns, documenting surface defects and the general condition.

Their report will serve as a base line to measure the impacts of weathering over time and to highlight potential areas that may require targeted maintenance, ensuring the installation can be enjoyed for many years to come.