Misty Buckley is a production designer for live touring shows, TV and large scale events. She works as creative director for many parts of Glastonbury Festival and won Set Designer of the Year at the TPi Awards in 2013 and again in 2014. Recently Misty designed the amazing West Pier structure for Rag ‘n’ Bone Man’s Brits set.

Do you have a Brighton connection?

After getting a Art degree at Central St Martins, I worked as an Art Department assistant for a couple of years.  I have always had a connection with Brighton, as my aunt and uncle lived there, so I would visit it a lot and had loads of friends there.  I moved there in 2003 and lived right by the sea, which was an amazing time in my life.  I decided to do an MA in Interior architecture and was lucky enough to study with the fantastic Frank O’Sullivan.

How did you first come to work with Rag ‘n’ Bone Man?

I really love Rag n Bone Man’s music.  When the album came out, I contacted the manager and asked if I could design for him.  Then when I heard he was playing the Brits, I was thrilled that I got the opportunity to do some set design work for him.  The music is so emotional, it really brings up a lot visually…

What was behind your decision to design the West Pier structure for Rag ‘n’ Bone Man’s Brits Set?

Well, I knew that the set had to relate to Rag n Bone man as an artist.  It had to be authentic and couldn’t be a generic shape or idea… It had to represent the depth of his voice, the grittiness of his stage persona and the beauty of his words.  The song he was going to perform was “Skin”… I drew on everything I knew about Brighton (where Rory is from).  I thought literally about his tattoos… and about street art of Brighton and the facades of buildings.  The more I listened to the track, there is so much pain in there and so much rich emotion… It made me think of the power of waves…   Then I remembered the night that the West Pier burned down and we all went down to the beach and watched in horror and amazement and sadness.  It was all those emotions, I was trying to capture in the design, as a supporting role to Rag n Bone Man and Jorja Smith’s performance.

How long did it take for the design to come to fruition?

We started working on it around November… and then it was delivered two days before the show in February…The design was very intricate and took a lot of planning.  I worked on the performance with the band’s Creative Director,  Will Potts.  We wanted to get the right tone… and we didn’t want to be over-dramatic.  It was very much about balance.

Where do you get your creative inspiration from?

Mostly from film, art and photography… I’ve always been very moved and inspired by photographs.  There are some incredible ones of Glastonbury during the 1970’s, 80’s and 90’s that really tell the story… from the peaceful days of naked hippies on horseback to the anarchy and energy of the punks…through to the hedonistic 90’s rave scene…   It just sparks the imagination in to other peoples’ lives and perspectives.  I recently devoured an exhibition in New York about Public Art and Activism in New York over the past 50 years… It was just extraordinary… I was there so long, they had to escort me out at the end…

What has happened to the structure now?

The structure was all made of steel… So much like the West Pier, has been sold for scrap and been recycled.

What are you working on at the moment?

I am working all over the place at the moment.  Sometimes you start a year knowing you are not going to see much of home this year.

You’ve designed a number of arena tours and TV performances as well as large scale TV music events. What’s been your favourite design and why?

My favourite is and will probably always be Glastonbury Festival.  It just means so much to me and my family.  I think it is the pinnacle of where creativity in the visual arts meets creativity in music, theatre, poetry… and more… it really is beyond words.  Regardless of the weather, it is just the beauty of the human spirit and abilities that I really adore.

Do you have any advice for people looking to get into production design?

Work really hard… expect to do long hours and be there until the very end.  Do lots of courses to build up your skill set and get as much on site experience as possible.  Be kind to everyone, no matter what their role… The whole crew is as important as the artist… They all work long hard hours to deliver your vision, so they deserve the most amount of respect. 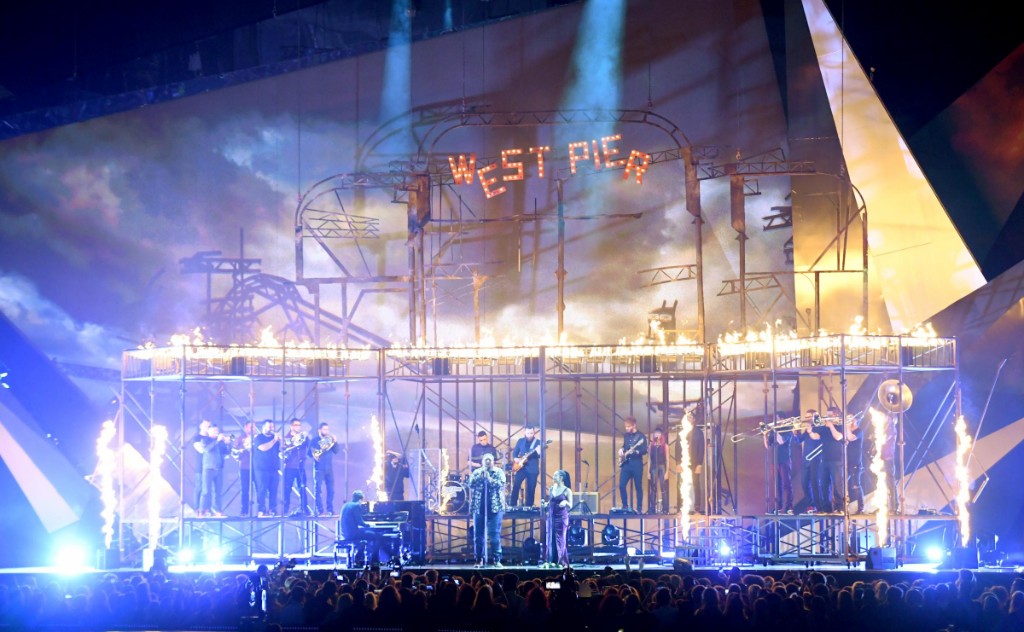