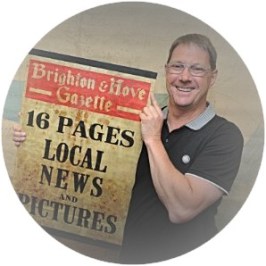 Andy Garth, a Brightonian and local historian, has created  an Aladdin’s cave of Brighton, Hove and Sussex history.  His shop Brighton and Hove Stuff is an ephemera of pictures, maps, from a bygone era. The shop is based in one of the city’s main shopping districts of Hove and is regularly visited by enthusiasts, residents and tourists alike. It plays an important role in promoting Brighton’s unique identity and giving people an opportunity to look and purchase pictures, maps, books and postcards.

As a child what did you want to be when you grew up? A Popstar!

Did you grow up in Brighton? Yes, in Fiveways.

Who had the greatest influence on you during your childhood? My Mum.

If you could live in any other time, when might that be? In 1930’s Brighton, when they started to build swathes of new houses.

What one word would you use to describe yourself? Jack of all trades!

What’s the one thing about you few people know? John Peel liked one of the songs I wrote when he saw my band in 1979 supporting The Piranhas. We got a mention in Sounds Magazine.

Tell us more about your involvement with Brighton & Hove Stuff. It’s my passion and hobby. I love collecting, especially everything to do with Brighton.

What makes Brighton & Hove so special for you? Born, bred, schooled in Brighton – I haven’t been able to find anywhere else that matches it. Also, I have to be able to see the sea!

Do you have a particular interest in the West Pier? I was 15 when the Pier closed. It’s been here all my life. It’s an unbelievable feat of engineering for 1866.

What’s the most unusual piece of WP ephemera you’ve seen? I did have a large piece of the pier but I left it on the balcony of one of my properties that I sold. I love posters featuring the West Pier. Originals still turn up from time to time.

If you could holiday anywhere where would it be? Sicily.

Who is your Brighton role model and why? Henry Smith – my mentor. I met him when I was working in property. Sadly Henry is no longer with us, but he was a font of information on all things Brighton and he taught me to appreciate collectables.

What’s your favourite local fact? That when Abba won the Eurovision Song Contest in Brighton in 1974, Olivia Newton John represented the UK.