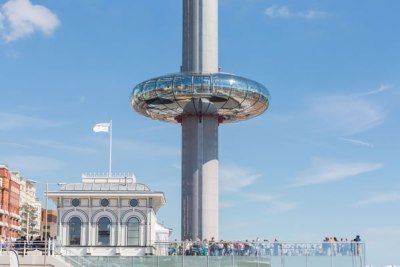 When the Trust lost its Heritage Lottery grant after the two  arson attacks in 2003, it was clear that a restoration of the original West Pier was no longer a feasible possibility.

The Trust certainly didn’t have anything like the millions that would have been required for such a massively expensive undertaking. And private developers investigating the likely returns on the huge investment concluded the project was unviable.   The economics of piers today are very different from when the West Pier was a going concern.

Faced with such a bleak outlook, the approach in 2005 by the architects of the London Eye, Marks Barfield Architects, to build a Brighton Eye on the root end of West Pier was a solution beyond imagining.

In the Trust’s view British Airways i360 is a wholly appropriate vertical pier for the 21st century, a brilliant new landmark for Brighton, and a worthy successor in design and engineering terms to the West Pier

But more than that, British Airways i360 will enable the Trust to achieve a number of important aims. The funding received as landlord will enable it to meet its responsibility to clear the wreckage of the old pier from the sea bed and re-establish a seafront base by taking an arch east of i360 as an office and information point. Significantly it will also enable the Trust to explore with architects and developers the opportunities for constructing a 21st century pier. A project that  the Trust considers will be made considerably more attractive by the existence and success of British Airways i360. 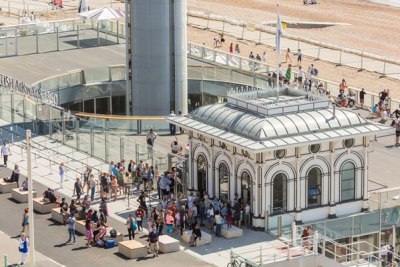 Funding for British Airways i360

Funding for the British Airways i360 has come from the architects, Marks Barfield, the Local Enterprise Partnership, and the Public Sector Loans Board.

The Public Sector Loans Board,  which is providing the lion’s share of the funding, offers a scheme whereby the government loans money to a local council at one rate of interest, which then loans it on to a commercial project at a higher rate of interest. It is similar to a mortgage and enables the local council to make a profit on the arrangement. For example, it’s estimated that Brighton Council will make one million pounds a year on the deal with British Airways i360. The funding from the Public Sector Loans Board is a loan not a grant. It has to be repaid and could not therefore be used to pay for a non-commercial project such as a school or hospital.

Many have asked why the West Pier can’t be rebuilt using funding from the Lottery, like Hastings Pier.  The reason is that the substructure of Hastings Pier survived its fire more or less intact.  The Lottery funding was to repair this.  From the deck level up the structure will be new and not replicate what was there before.  This is a great solution for Hastings but not relevant to the West Pier where the substructure has all but ceased to exist.

We know many people want to see a new pier in place of the original one.  And with the advent of British Airways i360, the Trust believes, there is now the opportunity to design and build a pier for the 21st century as innovative as the West Pier was in 1866.  But it won’t be straightforward to come up with a proposal which is economically viable and an elegant addition to the seafront.  And it won’t happen overnight.  We are currently working on options for a new pier and will share our thoughts with all interested parties in due course.